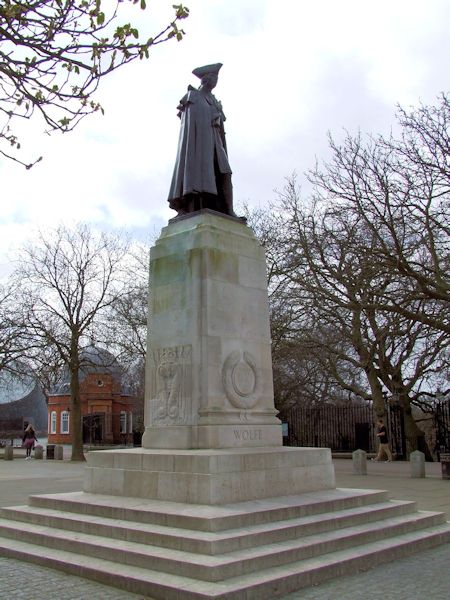 On top of the same hill as the Old Greenwich Royal Observatory is a statue of General James Wolfe, (1727-59) looking out towards the river. General Wolfe commanded the British forces at Quebec against the French and won a great victory, at the cost of his life. He was a resident of Greenwich and is buried in the parish church, St Alfege's.

The statue was erected in 1930 and bears the inscription "This monument, a gift of the Canadian people, was unveiled by the Marquis de Montcalm". On a personal note, my father formed part of the Honour Guard of Boy Scouts at the unveiling ceremony.

The area around the statue gives the grand view over Greenwich, embracing the Queen's House, the National Maritime Museum and the Old Royal Naval College, with the Isle of Dogs across the river, with the dome of St Pauls and other tall buildings in the City of London and the Canary Wharf area. This is probably the most photographed view in Greenwich.

The view from the steps of the statue (click to enlarge)