If you intend using public transport you are strongly advised to get an Oyster card to travel around London. You can use it to travel on bus, Tube, Tram, DLR, London Overground and most National Rail services in London. For more information see the TfL Oyster page 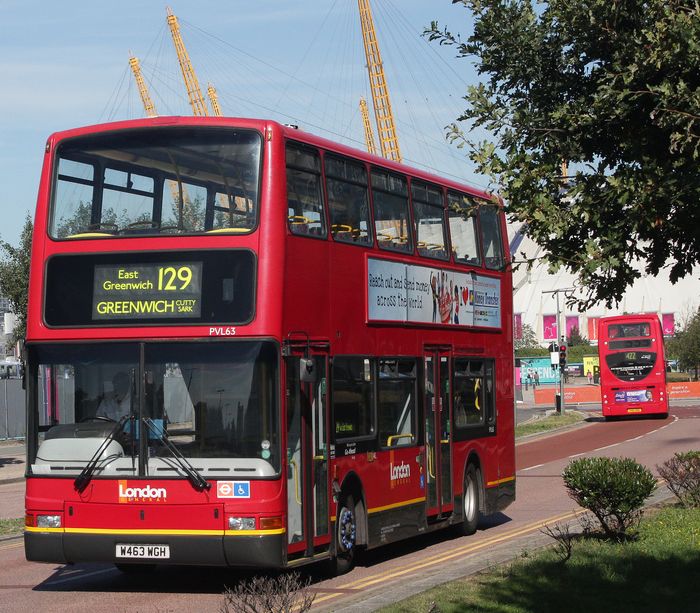 It is possible to get to Greenwich by many means of transport. The centre of Greenwich is about five miles (eight km) from central London. See also the Street Map page for a map of central Greenwich and a link to Bing Maps.

The world's oldest suburban line runs to Greenwich; the trains are more modern!

There are several other stations on the same line in the London Borough of Greenwich, notably Charlton for access to Charlton Athletic Football Club at The Valley; Charlton and Woolwich Dockyard (closed Sundays) are the nearest stations to the Thames Barrier. If you are going to Greenwich Park, the National Maritime Museum, or the Old Royal Naval College you might find Maze Hill station more convenient than Greenwich station.

To plan your journey, use the on-line timetable provided by Timetables On-line

Boats arrive at Greenwich Pier, near the Cutty Sark and the Royal Naval College. All journey times are approximate due to tidal movements. More boats run during the summer months; contact the boat operators for details.

Note: There is no service from the Thames Barrier pier December - February.

London City Airport is just across the river at Silvertown. There are regular flights by a number of operators to and from Europe and Ireland. Greenwich can be reached by road via the Blackwall tunnel or Woolwich Ferry, by the Docklands Light Railway, by train or Docklands Light Railway to Stratford, then the Underground or by bus, although the latter route demands a number of changes.

From London Gatwick airport is is quickest to travel by train to London Bridge then change there to a Greenwich line train. If travelling from London Heathrow travel to central London and catch a train from London Charing Cross, Waterloo, Cannon Street, or London bridge stations.

For general enquiries contact London Transport, phone: 020 7222 1234. Some buses do not run on Sundays, and not all buses travel the full route.

The following buses serve the centre of Greenwich:

These buses run near central Greenwich, and may be useful for Greenwich Park and Blackheath:

These buses run to North Greenwich station: (See also 108 above)

Severe parking restrictions are in operation in most streets in and around Greenwich. Travel by car is not really recommended unless you have a guaranteed parking spot. There are very few car parks available in central Greenwich. It may be best to travel to somewhere nearby and finish your journey by public transport.

That said, here are general directions for reaching Greenwich:

North London:You will need to cross the Thames. You can go to central London, then follow the directions given below, or cross downstream. The Rotherhithe Tunnel (A101) is very old and windy, and has height and weight restrictions. The Blackwall tunnel (A102M) is more modern, and has two bores, but gets very busy, especially in rush hours. The Woolwich Free Ferry often has long queues waiting to board, but you will get good views of the Thames Barrier.

The North Head for London (by M1, M11, A1 or similar). Take M25 (direction DARTFORD CROSSING) (Bridge: southbound, Tunnel: northbound) TOLL CROSSING (Car toll presently: One Pound) If you have the correct change - take the (automatic) right hand booths Toll booths are at the southern end of the crossing Next Junction (J2) take A2 (direction LONDON) Greenwich is just off the A2. Look out for signposts.

The Channel Take the M20 signposted: LONDON until J1 (M20)/J3 (M25) Take M25 (direction DARTFORD CROSSING) Next Junction (J2) take A2 (direction LONDON) Greenwich is just off the A2. Look out for signposts.

The South and West Head for London (by M3, M4, M23, A3 or similar) and take M25 Take M25 (direction GATWICK AIRPORT/DARTFORD CROSSING) Until Junction 2: take A2 (direction LONDON) Greenwich is just off the A2. Look out for signposts. 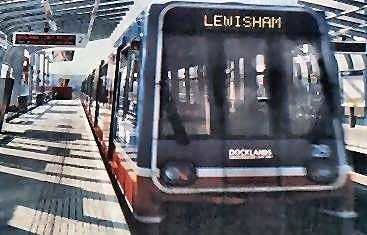 An extension to the DLR from the Isle of Dogs (Mudchute and Island Gardens) to Greenwich and Lewisham was opened nearly two months ahead of schedule on 22 November 1999. The £200 million extension has stations at Lewisham, Elverson Road, Deptford Bridge, Greenwich and Cutty Sark Gardens.

Trains run every four to six minutes during peak times, and every 8-12 minutes off-peak and at weekends.

An extension to the Jubilee Line through Greenwich to Stratford opened in December 1999, approximately a year and a half later than originally planned.

A station has been constructed at Greenwich North, adjacent to the site of the Millennium Plaza and the Millennium Dome (now the O2Arena). The station is the largest underground station ever built.

Running between North Greenwich and the Royal Docks, and with a journey time of less than 10 minutes, the cable cars provide access to the O2 Arena and Excel Centre. The terminals are also close to the Tube, DLR, buses and river boat services. See also the More Photos of Greenwich page and the Transport for London site. 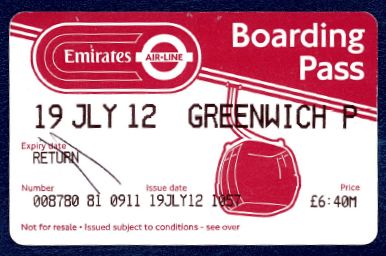 A ticket for the cable cars, whimsically called a 'boarding pass' by Emirates Air-line, who have presumably forgotten they are not flying a plane.

Special Note: Although I have tried to make the information on this page as accurate as possible, please don't blame me if the information here is out-of date. Travel operators can change their timetables without warning, and traffic problems, bad weather, etcetera, can have an adverse effect on journey times. Do make sure you allow plenty of time for your journey, particularly at weekends. A useful site to help you plan your journey is the Transport for London site.

The Greenwich Express by Holiday Inn is a convenient and comfortable hotel superbly located and suited to business travellers to the Greenwich, Excel Exhibition Centre, Charlton, Woolwich, Canary Wharf and South East of London areas. 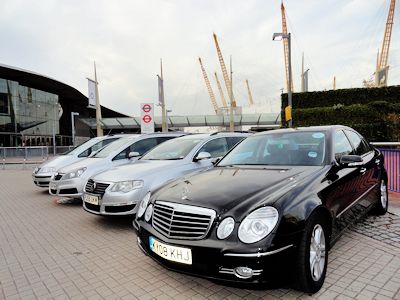 With over 50 years of experience in the Mini Cab industry Charlton Cars is one of South East London's leading Private Hire Operators. They currently have a fleet of over 100 vehicles and operate with a fully computerised dispatch system. Specialties include local and long haul journeys, airport and station transfers, school runs, weddings, executive events and deliveries.