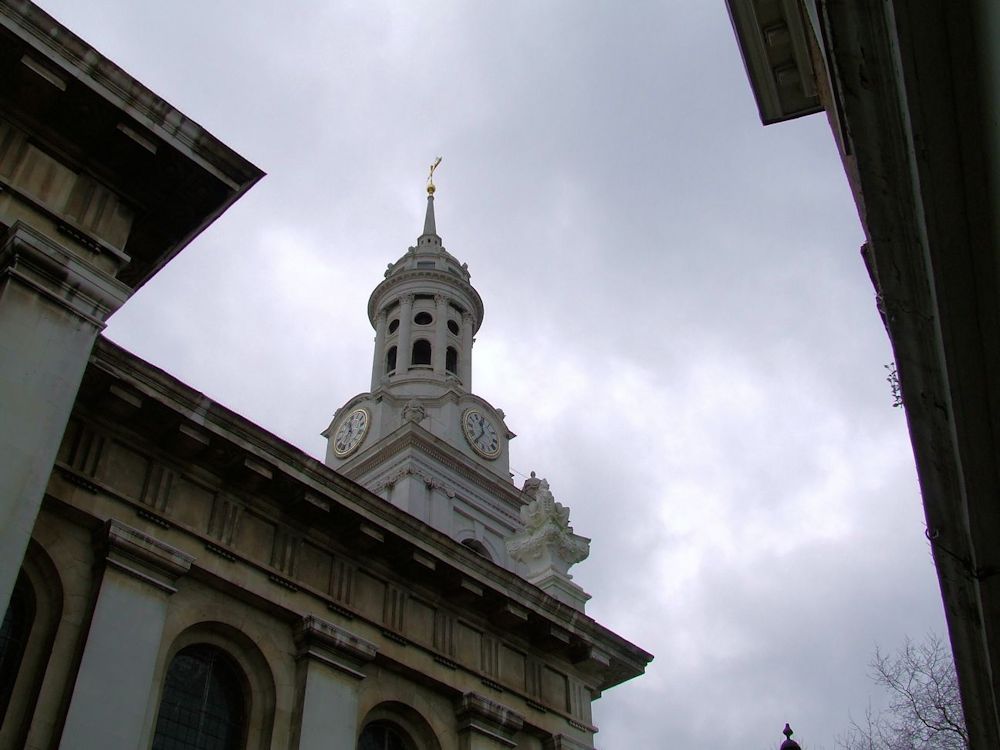 St Alfege was an Archbishop of Canterbury who was captured by a raiding party of Danes in 1012. They decided to hold him to ransom, but he refused to pay and was put to death, allegedly in Greenwich.

A church was built on the supposed site of his death in the twelfth century, and it lasted until the beginning of the eighteenth century. The church became the royal church in Tudor times when the court was based at Greenwich (see The Old Royal Naval College). It was mostly destroyed during a storm in 1710, and the present church was commissioned in 1711 and built in 1714.

The architect was Nicholas Hawksmoor, who designed an imposing classical building in Portland stone. Hawksmoor built the church incorporating the tower left still standing from the old church, but in 1730 John James encased the tower and added a steeple in the style of Wren. The interior was gutted during the last war, but was restored by Sir Albert Richardson in 1953.

Buried under the church is General James Wolfe (see also General Wolfe Statue), the hero of Quebec. There are four memorials to him inside the church; the 1762 painting by Edward Peary, "The Death of Wolfe", a wall tablet, a replica of his coffin plate in the floor, and a stained glass window.

Another notable buried under the church is Thomas Tallis, the composer and royal organist between 1540 and his death in 1585. He, too, has a number of memorials in the church. There is a replica of the original brass, a brass tablet erected in 1876, a 16th century organ console probably used by him, plus a stained glass window.