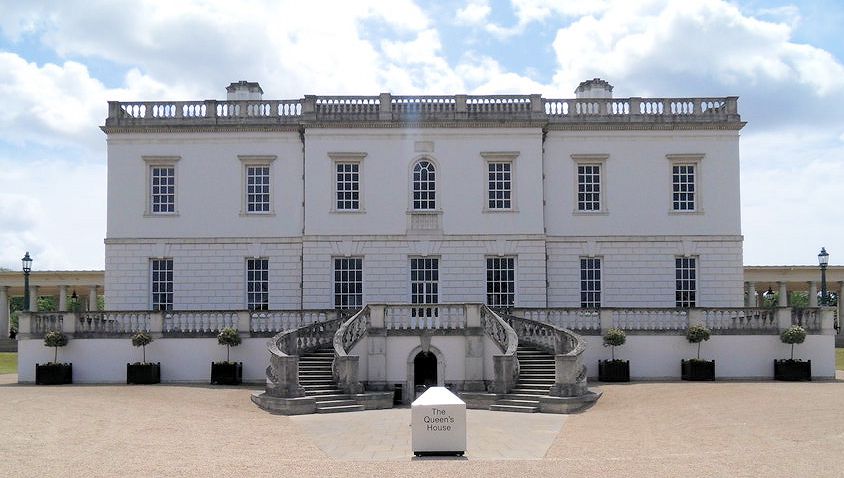 The Queen's House is nowadays part of the National Maritime Museum. It was originally part of the Royal Palace of Placentia. It was meant by King James I to be the home of his consort, Anne of Denmark. Inigo Jones was the architect, and construction started in 1616. The Queen died in 1619, however, and work was stopped until ten years later, when King Charles I gave it to his new Queen, Henrietta Maria. Inigo Jones was recalled and the exterior work was completed some six years later. The Queen stayed there only briefly, however, and in 1642 the Civil War started.

After the Restoration Charles II had the House enlarged by John Webb in 1662 to provide a residence while the new palace of Placentia was being built, as the original had been badly damaged during the time of the Commonwealth. (This is now the site of the Royal Naval College). It is not known if he ever actually lived there, however, and the building was in fact used by Henrietta, by now the Queen Mother, until her death in 1669. In 1690 it became the official residence of the Ranger of Greenwich Park.

When first built, the House straddled the main Deptford to Woolwich road, and it was possible to pass from the Palace gardens into the Royal Park without being seen crossing the road. In 1699 the then Ranger, Lord Romney, moved the road to its present position, effectively separating the Naval Hospital, the predecessor of the College, from the Park. In 1806 the Naval Asylum School moved into the House; it was linked along the line of the old road to extensions on either side by colonnades in 1816. The school (renamed the Royal Hospital School in 1821) moved out in 1933, and the buildings were opened in 1937 as the National Maritime Museum.

The interior was completely restored in the 1980s and the House was reopened in 1990 after a six-year closure. It is fitted out in the style of the 1660s as much as possible, and contains a mixture of original and replica furnishings. There are many carvings, paintings, sculptures, and other works of art on display; again, some are replicas, some original.

The elegant Tulip Stairs are the first geometric self-supporting spiral staircase in the UK. Although called the 'tulip' stairs, it is thought that the flowers in the wrought-iron balustrade are actually fleurs-de-lis, as this was the emblem of the Bourbon family of which Queen Henrietta Maria was a member. 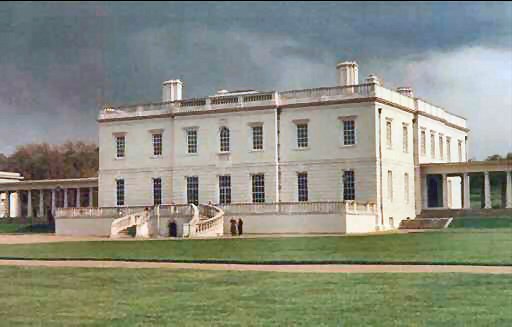 The Queen's House just before a thunderstorm 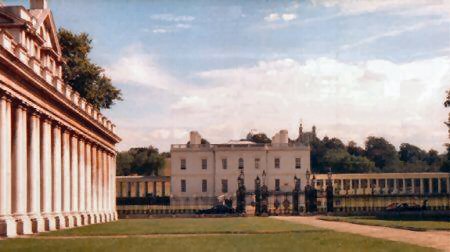 The Queen's House from the Royal Naval College 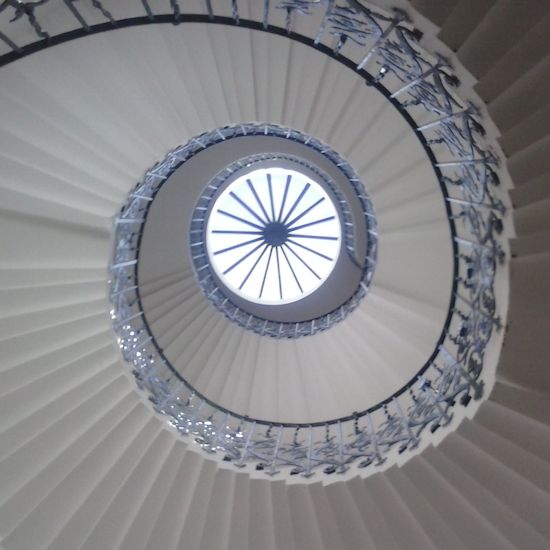