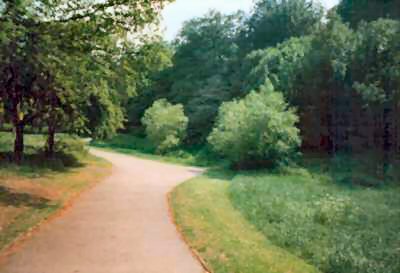 Maryon Wilson Park is formed from part of the old Hanging Wood, land that was owned by the Maryon-Wilson family, and opened to the public in 1926. It has a number of small streams running through it, and has some impressive trees, including some very pleasant willows. Most of the park is left "wild", with the exception of a small children's zoo containing deer, chickens, geese, ducks, and so on. (Larger photo 33.4K)

Hornfair Park was also created from part of the grounds of the old manor of Charlton, and was opened in 1935. Unlike Maryon Wilson Park, it is flat, with the more usual features of an urban park, such as playing fields, tennis courts, a children's playground, a kiddies' paddling pool (shown right, top; larger photo 33.1K), and a bowls green (right, bottom; larger photo 33K).

Maryon Park (left, top; larger photo 46K) is like a mixture of Maryon Wilson and Hornfair Parks: it is built on the site of one of the old Charlton sandpits, so two sides are heavily wooded and steep, with pleasant paths and steps running through them. The centre is flat, and contains a children's playground, a bowls green, and tennis courts (shown left, bottom; larger photo 35.6K).

The old sandpits, in an area known as Hanging Wood, were originally owned by the manor of Charlton, and were presented to the then London County Council in 1891. Some of the rest of the area has been used for housing, and one pit became Charlton Athletic's ground, The Valley.

For more information on this film, check out The Internet Movie Database