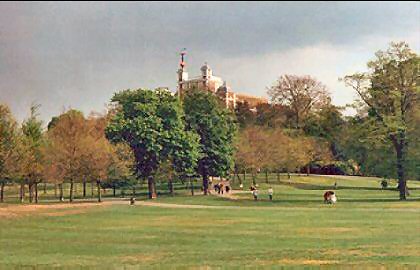 The Observatory from Greenwich Park

The Greenwich Royal Observatory was founded by order of King Charles II to study astronomy and to fix longitude; see the page about the Prime Meridian. The oldest in the group of buildings comprising the observatory is Flamsteed House. It was built in 1675, with Sir Christopher Wren as the architect. It was built as a home for the first Astronomer Royal, John Flamsteed. He lived in the four rooms of the ground floor, and worked in the Octagon room above until his death in 1719. His successor in the office was Edmund Halley, famous for the comet that bears his name. Later Astronomers Royal lived there until 1948. The time ball on the roof was first erected in 1833, providing the first public time signal. At five minutes to one p.m. every day the ball rises half-way up the pole, reaching the top at two minutes to one. The ball drops at exactly one o'clock. Since the ball can be clearly seen from the river, ships have used the signal to check their time.

Other buildings include the Meridian Building, which is really three, built between 1749 and 1855, and the Great Equatorial Building with its onion-shaped dome. This was built in 1857, with a dome installed in 1893. The dome was severely damaged during the second World War, and the existing dome was erected in 1975.

The work of the Royal Greenwich Observatory was moved to Hurstmonceux Castle in Sussex in 1948, and from there to Cambridge at the end of the last decade. They have a Web site at http://www.ast.cam.ac.uk/RGO/.

The buildings now house a part of the National Maritime Museum. The interior now holds many of the instruments used in the past, plus a collection of time-telling devices from sun-dials to atomic clocks. Among the exhibits is a 28 inch refractor telescope, one of the largest in the world. It was originally moved to Hurstmonceux, but was returned on the tercentenary of the Observatory. It is still used for reseach and teaching.

Next to the Observatory buildings is the new 120-seater Peter Harrison planetarium which employs the latest space exploration technology.

Some of the observatory domes