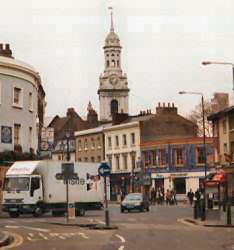 The market has been on its present site since 1831. It started as a general market, but in 1958 it became solely a fruit and vegetable market. In 1984 this use ceased, and it has now become an "Arts and Crafts" and food and drink market. The warehouses round the edge of the market have been converted to shops. The first photograph was taken in December, hence the Christmas decorations hanging from the roof; it was not a market day. The second picture was taken during the spring, when the market was in full swing.

Trinity Hospital is an almshouse founded in 1613 by Henry Howard, Earl of Northampton, and is nowadays run by the Mercers Company. The Hospital was rebuilt in 1812 in its present Gothic style. It looks rather incongruous in its location on the Riverside Walk. A board by the entrance states "Since 1617 it has provided a home for 21 retired gentlemen of Greenwich". 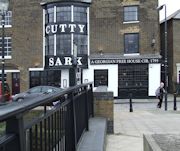 The Cutty Sark pub is situated in Ballast Quay, on the Riverside Walk. The building was built around 1804, and its particular feature of interest is the big bowed oriel window. Its former name was the Union Tavern, and, like the Trafalgar Tavern, it was known for its whitebait suppers. 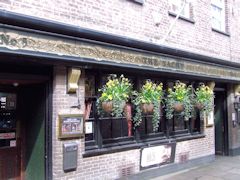 The Yacht is found in in an alley running beside the Trafalgar Tavern, at 5-7 Crane Street. The Yacht is a traditional British pub serving cask ales and pub food. 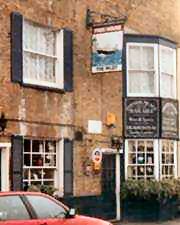 The Pilot is situated at 68 River Way, Greenwich, a little past the Blackwall Tunnel, close to the Millennium Village and the O2 Arena (see below). The pub was built in 1801 and was extended in 1923 and again some 15 years ago.

"The First Shop in the World" 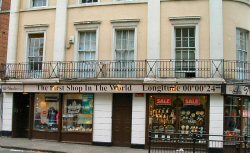 This claim refers, of course to the shop's situation close to the Prime Meridian. The shop sells nautical memorabilia and is on the corner of King William Walk and Romney Road. A unique selling point! 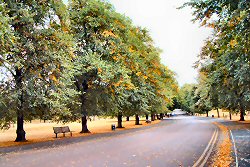 The Avenue runs through Greenwich Park from the Blackheath Gate in the south to St Mary's Gate in the north. This photograph was taken in August, after a long period without rain, hence the bright yellow colour of the grass.

St Mary's Gate is situated in the north-east corner of Greenwich Park. These photographs show the gate from King William Walk looking into the park, and from inside the park looking at King William Walk, with a fine view of the Cutty Sark's masts in the background.

The Millennium Dome or O2 Arena

During the year 2000 the Dome was the focal point of the country's Millennium celebrations. More than ten million visitors from all over the world were expected to visit the Millenium Exhibition during its year-long run, with a planned capacity of 100,000 per day. However, numbers were well down on the projected figures, with less than half the hoped-for visitors. The shortfall meant the organisers having to ask for additional funding from the National Lottery a number of times, with subsequent bad publicity. After closure of the exhibition at the end of 2000 it stood empty for five or six years. The cost of the Dome was £789 million and a further £350 million has since been spent on converting it to an entertainment complex named the O2. There is a large arena for concerts, plus a smaller music venue, a cinema complex, restaurants and bars, an exhibition centre, and a beach which will be turned into an ice rink in winter. Many well-known bands and singers have appeared there already, with plans for many more concerts in the future.

The arena is also intended to host sporting events such as ice hockey, and has been chosen as the venue for gymnastics and basketball at the Olympic Games to be held in London in 2012.

The 130 acre (52 hectare) Greenwich Peninsula site was until recently a wasteland; it was formerly the largest gasworks in Europe. The Dome is the largest such structure in the world, over 50 metres high and over 300 metres in diameter. It has already become a London landmark, and is particularly well seen by planes arriving at London's airports.

The first two images are copyright © FreeFoto.com. The third was taken by me from one of the Emirates cable cars crossing the Thames at Greenwich.

Officially known as Emirates Air Line (also known as the Thames Cable Car) the cable cars are a Transport for London (TfL) gondola lift cable car link across the River Thames in London built with sponsorship from the airline Emirates. The service opened 28 June 2012. The cable cars run from Greenwich Peninsula (near the O2 Arena) to the Royal Docks on the other side of the River Thames. 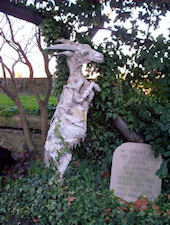 Ballast Quay Garden was made in the 1960s when the wharves on either side were still working. It is a private garden for the use of residents of Ballast Quay but you can see it all from the road.