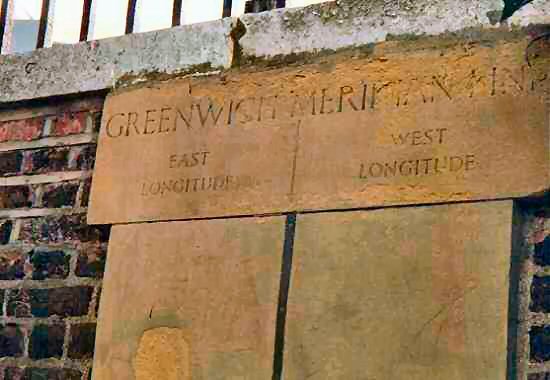 The line marker outside the Observatory

Latitude and Longitude are the means by which a ship is able to discover its whereabouts, and thus be able to navigate safely. They are, of course, imaginary lines drawn on the face of the Earth. It was a relatively simple job to discover latitude by measuring the height of the sun, but longitude was a different matter in earlier centuries. It was discovered that if one compared the time shown on two clocks, one adjusted to keep showing local time and the other remaining unaltered, the longitude could be calculated, but the problem was that the clocks of the period were not accurate enough, especially those capable of running aboard ships. Errors of a few minutes could all too frequently cause mistakes possibly leading to shipwreck.

Greenwich Observatory was set up by King Charles II in 1675 to study means of fixing longitude, and became the acknowledged world authority on the subject. An International Meridian Conference was convened at Washington in 1884 and the delegates recommended to their respective governments that Greenwich should be adopted as the prime meridian. The decision was by no means unanimous. A Canadian delegate, Sanford Fleming, produced figures showing that 72% of the world's shipping used Greenwich as prime meridian, with the remaining 28% divided among ten different meridians. The French, for political reasons, said that they would only accept Greenwich as the prime meridian if Great Britain adopted the metric system. Over the following years the various governments adopted Greenwich officially as prime meridian, with only France going its own way. A bill was passed eventually in 1911 but stayed on the statute books until 1978 when France adopted Universal Time.

GMT is mean solar time, with midday defined as the at the time at which the sun crosses the Greenwich Meridian, 0 degrees longitude. Because the Earth's orbit is elliptical, the sun doesn't appear to move against the stars at a constant speed, so a hypothetical mean sun is used, imagined to travel at a constant speed, the average of the sun's actual speed. A second is defined as 1/86400th of a mean solar day.

Later scientists found that, because of wobbles in the planetary orbit, they needed a more exact measurement of a second, and in 1967 brought in Universal Co-ordinated Time (known as UTC for some reason, rather than UCT). This defines a second by relating it to radiation emitted from a caesium-133 atom. UTC has officially replaced GMT, but for all but the most exact time measurements they are the same, and most people still refer to GMT. Ironically, UTC is co-ordinated from Paris, although it is based on Greenwich, not Paris time.

In the courtyard of the Observatory, and just outside, are brass strips set in the ground and walls marking the exact site of the line of the meridian. It is therefore possible to stand astride the line, with a foot in each hemisphere; a favourite tourist occupation.