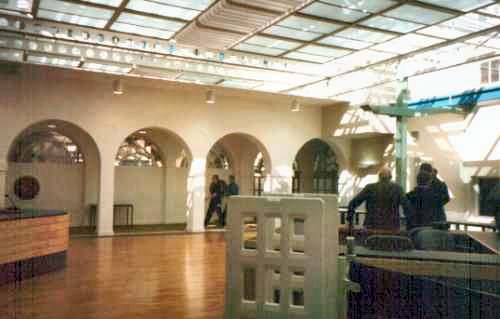 What is now the Dreadnought Library building was designed to replace wards in the Royal Naval Hospital used for infirmary purposes and to house 'Helpless Pensioners' (that is, those without legs, or otherwise unable to look after themselves). By 1763, at the end of the Seven Years' War, the Royal Hospital was owed £80,000 in prize money by the Admiralty, enabling the Commissioners to build a separate Infirmary.

Built between 1764 and 1786 at a cost of £18,500, to the designs of James 'Athenian' Stuart, Surveyor to the Royal Hospital, the Infirmary was extensively rebuilt after a major fire in 1811, and further alterations in the 1840s created the present overall appearance. Further internal alterations were effected in the rebuilding to repair bomb damage in 1940 and 1941, although these were not completed until the late 1950s.

As conceived by Stuart in the 1760's, the Infirmary represented the most advanced ideas of design for care of medical and surgical cases, though intended by the Commissioners to be 'as plain and as little expensive as the nature of it will admit'. These features are evident in the general layout of the infirmary, with two main wings with central corridors from which all the spaces or rooms are accessed. There is a large central courtyard containing an ablution (wash-house) block, and in the survival of a few of the original 64 small wards, each of which was capable of holding four bedsteads with canopies. Each ward had its own fireplace and sash windows incorporating ventilation slots. Medical and surgical patients were kept apart, and the Matron and senior medical staff also lived in the Infirmary.

When the Royal Naval Hospital was closed in 1869, only six patients were left in the Infirmary, and only 20 in the single-storey Helpless Wards (built between 1808 and 1810 to the West of the Infirmary). The Admiralty agreed with some reluctance to lease the Infirmary to the Seamen's Hospital Society in 1870.

The Society had maintained three hospital ships moored in the Thames off Greenwich, the last of which, the hulk of the Dreadnought, was eventually abandoned and broken up in 1872 when the last of the patients were transferred. The Dreadnought Seamen's Hospital, previously the Infirmary, maintained the tradition of care for former seamen, but now for the merchant marine rather than the Royal Navy.

The hospital became a National Health Service hospital specialist unit, still ministering to sailors, but was closed in 1986. It fell into an advanced state of decay and disrepair, necessitating wholesale replacement in 1998-1999 of timber and plasterwork, irretrievably damaged by wet and dry rot, during the programme of renovation and conversion to a library by the University of Greenwich in 1998 and 1999.

Many of the internal walls between wards, and those on to the corridor, were removed over the life of the Hospital to create larger wards and other medical requirements, such as operating theatres, in the early 20th century. The renovation just completed has retained many of these more open areas, as well as the surviving four-bed wards.

Also retained are the main staircases in the centre of each wing, as well as the more domestic-like stairs at opposite ends of each wing. Most of the various archways within the building are part of the original fabric and the arcaded colonnade which links the main wings, sub-dividing the central courtyard, forms a significant retained feature. Here, two 18th century iron and glass lanterns have been refurbished and re-mounted in their original positions.

Tangible evidence of the Seamen's Hospital exists in the many endowment plaques, originally fixed on the ward walls but recovered, cleaned and re-mounted on the ground floor arcade corridor. These ceramic tile plaques commemorate many societies and individuals, each of whom contributed £1,000 or more to endow a bed or even a ward.

The three floors of the building each provide approximately 1,000 sq.m. of usable space for library and information resource areas and the clearly-organised wings give easy access to library stacks and study places on either side of the generous central corridors. The distribution of stacks was to some extent determined by structural considerations, although planning policy has been not to separate rigidly the two main functions.

The north and south halves of the central courtyard between the wings has been filled in with similar steel and glass constructions which include a ship's deck-like structure of horizontal pierced beams supporting the main glass roofs.

The main entrance to the library is from the south side of the building through the double-storey height archway. The enquiry and control desk is central to the entrance; over to the left there is a long library issue and enquiry counter.

Library users proceed to the colonnade where they can gain access to the main library accommodation by lift or stairs. The two wings are colour-coded, red and green, port and starboard (prow to the south!). The longer north court, with similar structural enclosure to the south court, will be entered solely from the north through a similar archway. 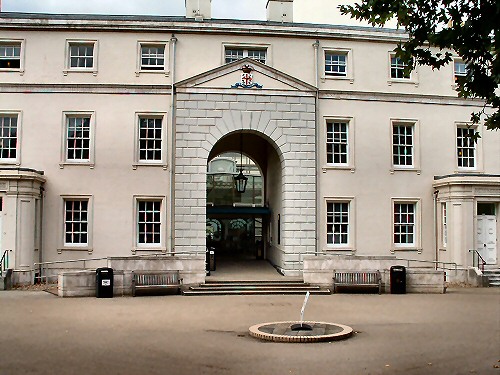 The main entrance to the library