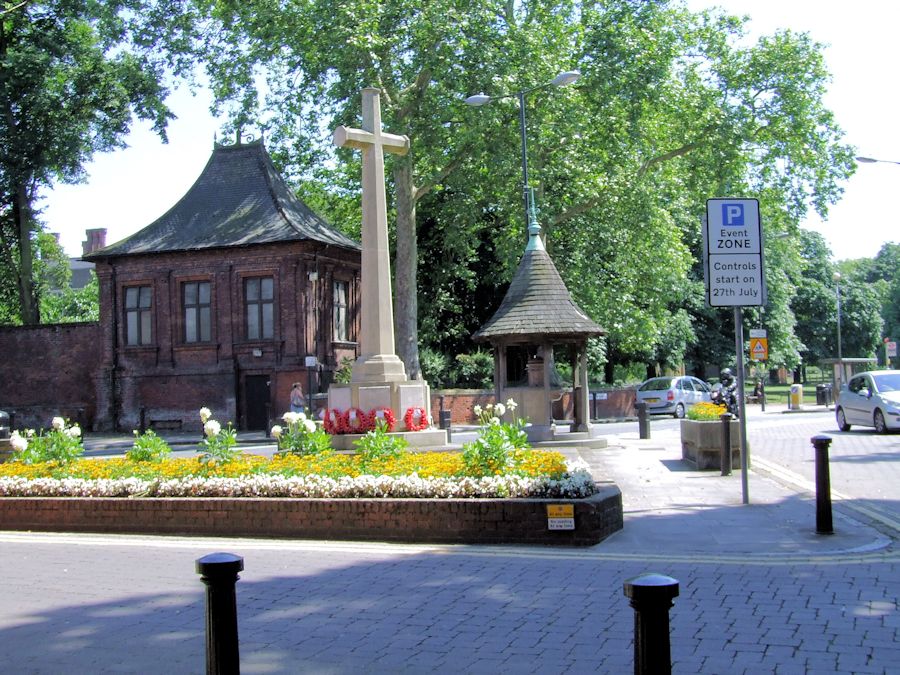 The war memorial and drinking fountain, with Charlton House summerhouse in the background

Charlton is part of the London Borough of Greenwich. It retains its historical sense of identity because of the old village centre, which still has a village atmosphere. The village is composed of Charlton House, which is the finest Jacobean mansion in the London area, the old village green in front of the House, the parish church of St Luke, and the village street.

Between 50 BC and 250 AD there was a large Romano-British settlement on a hilltop site to the north of the present village. There was a Saxon village near the present site, a church being there since the 11th century. The name comes from "churl town", meaning a settlement of churls, or free labourers.

The Manor of Charlton is mentioned in the Doomsday Book, the list compiled on the order of the Norman king, William the Conqueror, of his new possessions as Cerletone. William gave it to his half brother, Odo, Bishop of Bayeux, and ownership was then transferred to the monks of the Priory of Bermondsey. It remained in the hands of the Church until the dissolution of the monasteries in the reign of King Henry VIII.

"Modern" Charlton can be said to have begun in 1607, when the Manor of Charlton was acquired by Sir Adam Newton. Sir Adam was at that time tutor to Prince Henry, son of James I. The building of Charlton House began in 1607, and it was finished in 1612.

Charlton is mentioned a couple of times by the famous diarist, John Evelyn (1620-1706). On 30 March 1652 he says: "In the afternoone to Charlton Church where I heard a Rabinical sermon. Here is a faire monument in black marble of Sir Adam Newton, who built that faire house neere it for Prince Henry, and where my noble friend Sir Henry Newton succeeded him". Again, on 9 June 1653 he writes: "Went to visit my worthy neighbour Sir Henry Newton at Charlton, and consider the prospect, which is doubtless for city, river, ships, meadows, hill, woods and other amenities, one of the most noble in the world..."

The Manor of Charlton belonged to the Maryon-Wilson family between 1767 and 1923. In 1829 they enclosed the village green which had been in front of the House, and added it to their grounds. The green had been the site of the ancient and notorious Horn Fair, which was transferred to a field nearby until it was suppressed in 1874 on the grounds of the drunken behaviour of the revellers.

The four parks of Charlton were all part of the manorial grounds held by the Maryon-Wilson family. Charlton sand pits, which were originally part of an area known as Hanging Wood, were presented to the London County Council in 1891, and one of the pits became Maryon Park. The then Metropolitan Borough of Greenwich bought Charlton House and its grounds in 1925; part of the grounds were opened in 1929 as Charlton Park, with another area opened as Hornfair Park in 1935. Maryon Wilson Park was opened in 1926, formed from the remaining part of Hanging Wood.

One of the other attractions of Charlton is the Thames Barrier, situated on the border between Charlton and Woolwich, to the north-east of Charlton Village. The area along the riverside is primarily an industrial zone, and is known as New Charlton. Industrial development began there in the middle of the 19th century, especially after the opening of a private railway branch line to Angerstein Wharf in 1852. By the 1930s the area was thriving, but since the 1960s the area has sunk into a decline, with most of the original factories closing down. There has been some attempt at regeneration in recent years, but this is mostly retail warehouses and supermarkets, not industrial factories as in the past.

Charlton is the home of two major football clubs playing under different codes. Charlton Athletic play Association Football ('Soccer') at The Valley, which was built on the site of one of the Charlton sand pits. Currently they play in the Premier Division of the Football League.

Blackheath play Rugby Union at The Rectory Field. Blackheath are the oldest open Rugby club in the world; they were founded in 1858 and have played at The Rectory Field since moving from Blackheath itself in 1882. The Blackheath Club also have thriving Cricket, Lawn Tennis, and Squash sections; in fact, until the 1960s, Kent County Cricket Club used to play their home match against Surrey there.

For more photographs of Charlton, see this page. A street map of Charlton is here.