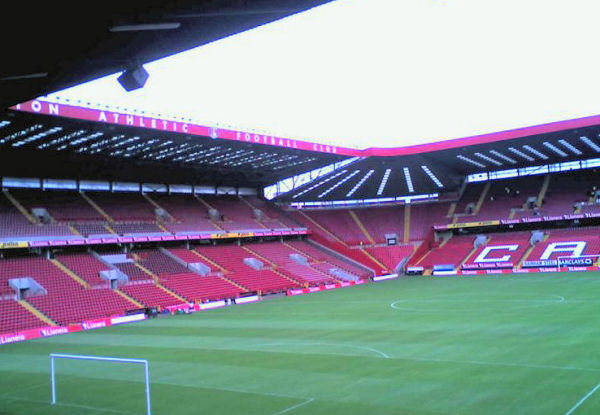 They gained promotion to the Football League's First Division in the 1930s and stayed there as one of the country's top clubs until the late 1950s. Charlton have won the FA cup once, in 1947. Their largest attendance was officially 75,031 on 12 February 1938 for an FA Cup fifth round tie against Aston Villa. The Valiants were at their peak just before and after World War II, and one wonders what might have happened if there had been no interruption to football during the war.

Since the Sixties, Charlton have gained promotion back to the First Division a number of times, only to be relegated again not long after. Some years ago the league system was reorganised, with the majority of the First Division clubs forming a new Premier Division, and the old Second Division becoming the new First Division, the Third becoming the Second, and the Fourth the Third. Charlton had never played in the new Premier Division until 1998, when they just gained promotion by the skin of their teeth, beating Sunderland in the play-off at Wembley 7-6 on penalties after extra time, the game being tied at 3-3 at full time and 4-4 at the end of the extra half hour.

Regrettably, their stay in the Premier Division was again a short one. On 16 May 1999 they had to beat Sheffield Wednesday at home, and Southampton had to lose at home to Everton, for Charlton to stay up. They lost 1-0 and the fact that Southampton won 2-0 was immaterial.

However, the 1999-2000 season in the First Division was extremely successful. Charlton were among the leaders from the outset, and took over the lead of the division in January, after beating Wolves. It looked like Charlton's promotion would be gained in record time, but towards the end they slackened off somewhat, the First Division Championship and promotion finally being gained on Easter Bank Holiday Monday, April 26, when they gained a 1-1 draw at Blackburn.

Despite many pundits predicting that Charlton would again be relegated straight away, they finished in a mid-table position after the 2000-2001 season. In 2001-2002 they ended up 14th and they finished the 2002-2003 season in 12th place, after spending much of the season in the top ten. Over the last few years their performance has been similar; they have gained a reputation for doing well at the start of the season, but falling away towards the end.

However, after seven years in the Premier Division, Charlton were relegated to the Championship at the end of the 2006-7 season.

The current capacity of the ground is just over 26,000. There are now plans to expand The Valley in three phases, with a final capacity of 40,600. The first phase, which will see capacity increased to over 30,000, was granted planning permission in 2005. However, following their relegation, the future expansion plans are in doubt.

For more information, match reports, stats, interviews and so on, see the Charlton Athletic FC site.