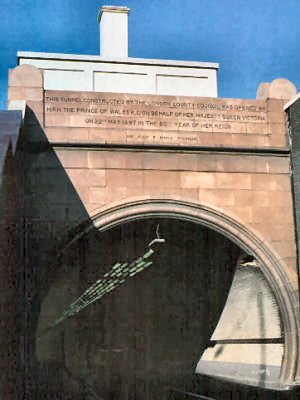 Blackwall Tunnel is a free road tunnel under the River Thames, between Blackwall Point in East Greenwich and East India Dock Road in Poplar.

The year 1997 saw two anniversaries for the Blackwall Tunnel. One hundred years earlier the first bore of the tunnel was opened, on 22 May 1897, and the second bore was opened thirty years before, on 2 August 1967.

When the tunnel was opened it was at the time the longest underwater tunnel in the world. During construction, which took six years, 641 people living in Greenwich had to be rehoused because their homes were demolished, and new homes were built specially for them by the council. The cost of this, plus the building of the tunnel itself, provision of lighting, and purchase of land, came to £1,400,000.

One of the houses that had to be demolished was once owned by Sir Walter Raleigh; it was said that the first pipe to be smoked in England was lit there! Later, the same house had Sir John de Pulteney (four times Lord Mayor of London) and Sebastian Cabot as tenants at different times.

Brunel had only recently invented the shield tunnelling method, and had used it on an earlier Thames tunnel, now used by the Underground. The same method was used at Blackwall, but the ground under the river bed was composed of sand rather than clay. This presented real difficulties to the tunnellers. The tunnel was in places only five feet six inches (1.67 metres) below the bed of the river, and the use of compressed air in the tunnel meant that sometimes the pressure was too much and the ceiling of the tunnel would give way. This would cause thirty foot (nine metre) waterspouts in the river. However, for the time, the safety record was good. There were only seven fatalities in the six years of construction at Blackwall.

As traffic through the tunnel increased, it was apparent that a second tunnel was needed. The second bore took seven years to construct; one more than the first tunnel. The cost had not surprisingly gone up as well: around £9,000,000.

See Blackwall Tunnel Traffic News Report for the latest news on the tunnel and approaches.

Click on the thumbnails below for larger photographs. These three photographs are courtesy of and © Graeme Webb.