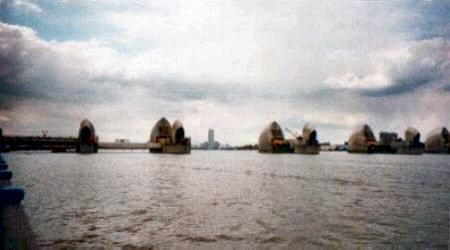 The Thames Barrier has been described as the eighth wonder of the world. It is certainly a very impressive work of engineering.

High water level at London Bridge has risen about two and a half feet per century, due to the melting of the polar ice caps and the activities of Man. However, the main possible cause of flooding in the London area is surge tides. These originate in the North Atlantic, and generally pass to the north of the British Isles. Occasionally, however, northerly winds will force them down into the North Sea, sending millions of tons of extra water up the Thames. One and a quarter million people were at risk, spread over 45 square miles.

In 1953 a particularly disastrous flood occurred. Over 300 people drowned and about 160,000 acres on Canvey Island, near the mouth of the Thames, were covered in sea water. The government appointed a committee to look at the flood problem. One of the recommendations was that a barrier be erected across the Thames. The main problem was that the volume of shipping using London Docks was at its peak, and that ships were getting bigger. This meant that an opening in the barrier of around 1400 feet (420 metres) would be required. A number of schemes were put forward, but failed to come to fruition.

Then the whole system of sea transportation began to change. Cargo began to be shipped in containers on purpose-built ships, and a new container port was opened downstream at Tilbury. The old London Docks became redundant. It was decided that openings only 200 feet (60 metres) wide, the same as Tower Bridge, would be sufficient, and the site of the barrier could be further upstream than originally envisaged.

Finally, work on building the barrier started in 1974. It was designed for the Greater London Council by Rendel, Palmer and Tritton, and was officially opened by H.M. Queen Elizabeth II on 8 May 1984, although the barrier was first used operationally on 1 February 1983. The 1716 feet (523 metres) width of the river is divided by nine reinforced concrete piers, to form six openings for shipping and four other openings. The piers are founded on solid chalk, over 50 feet below the level of the river. The four largest steel gates are 200 feet wide and weigh 1500 tonnes each. 4,000 men and women were engaged in the building work, which cost nearly 500 million pounds. In addition, eleven and a half miles of the river to the east of the barrier were protected by new walls, to a new defence level of 23 feet (7 metres). New walkways and amenity areas were created. This further work cost around 100 million pounds. Similar work was carried out by other Water Authorities, improving the defences to the mouth of the estuary.

Nearby is the Thames Barrier Visitor Centre, where a multimedia presentation gives details of the flood control problems, and shows how the barrier was designed and constructed. Admission is £3.40, £2.00 concessions. There is also a pier served by riverboats from London and Greenwich (see How to get to Greenwich).